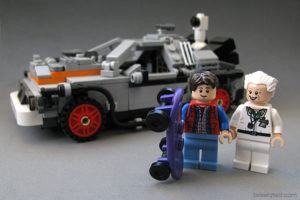 Can you believe it is 2015? I can’t. And all this talk of no flying cars and no hoverboards. Thanks for the false hopes, Back to the Future. Kidding. I love that movie series.

Although we didn’t get some of the advanced technology predicted in the movie (though we DID get the flatscreen TV, the 3D/4D movie experience, and thumbprint access), we have this glorious LEGO Ideas set
(was still called CUUSOO when this was released in late 2013).

After having built the Ghostbusters Ecto-1, I have to say this DeLorean could have been designed a little more heartily. But it is still cool, even with the typo on the flux capacitor (from the original release — you can find out about a corrected replacement piece here).

It is definitely not designed for much play — the door/roof/windshield piece isn’t interlocked so it falls off easily. But that you can turn the wheels down for flight and add Mr. Fusion amongst other era mods kind of makes up for any shortcomings with the build design.

Would have been cool to have a pink hoverboard included too, or maybe instead of the purple skateboard, but there’s gotta be a Friends skateboard that would work as a hoverboard, right? (Actually, I looked it up and it seems a pink one doesn’t exist, at least as of this writing.)

I am envisioning a lot of cool scenes that can be built and supporting character minifigs that could be created — my mind is spinning! Will add it to the list of the millions of other LEGO projects
I’d like to create. Looking at some of the fantastic BTTF stuff others have built is inspiring!

Here’s to a fantastic 2015, everyone! Make it happy, make it healthy, make it LEGOrific!