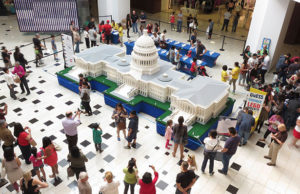 The LEGO Americana Roadshow has just finished its first city on its tour of America. Glendale, Calif.

Not being a huge mall shopper, finding these national treasures depicted in LEGO bricks strewn throughout the shopping center was tons of fun for kids of all ages.

The most impressive builds of them all is the Captiol Building (pictured above). Look at how massive that thing is! I would love to see behind-the-scenes video of how it is moved and installed from mall to
mall. 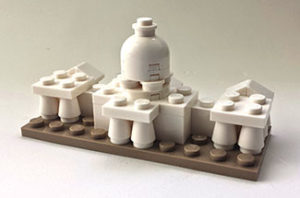 One of the weekends of the tour, kids were given the opportunity to build their own mini Capitol Building. Check it out — pretty cool! Everyone in line went down a row of bins filled with the necessary pieces, filling their cups with the right number of them as they worked their way to the
end of the row.

A great learning/teaching moment for the kiddies! 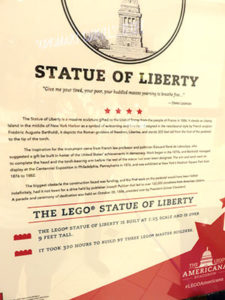 Each monument/landmark also had a 22″ x 28″ sign nearby that detailed the history of the monument itself, then how many masterbuilders and hours of labor it took to build the LEGO version.

Spread out between the monuments were display cases with little vignettes featuring tons of minifigures and structures with details galore. It would take a good half hour (at least) to look at everything and notice all the activities going on in a single case. They were a huge hit with the kids. In fact, they practically knocked over the cases out of excitement from pointing out the funny vignettes going on at every inch. Trying to take photos was nearly impossible as you dodged darting young’ns and the case suddenly lurched as you leaned in for a macro shot.

Each case must have been a blast to create! Here is one… it was a

snowy mountain scene with a huge snowman. The mountain was hollow and from the side you could see all kinds of activities going on underground and inside the mountain.

I think I visited the show AT LEAST three times during the two weeks it was at the mall. It was that spectacular! And I still didn’t feel like I saw every detail.

If it is headed to a shopping center near you, it is a MUST SEE. Here’s the schedule as of this entry’s publish date:

And, a list of the landmark models on display:

For the most updated information, check out the Roadshow page on Facebook.