It’s that time of year again. Either your heart swells with feelings of affection, or you loathe this day as you adorn yourself with all black and eat a bucket of ice cream to celebrate Singles Awareness
Day. 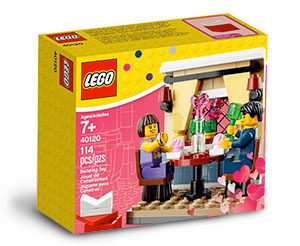 For me, it’s a reason to create LEGO things! As a seasonal set, the Valentine’s Day Dinner (40120) was released at a cool retail price of $9.99. Well, I decided that that money would be better spent on the
AT-AT Microfighter (check it out here), so I decided to take my collection of bricks, minifigures, and pieces, and try to create my own.

Had to do some improvising as I didn’t have all the same pieces. For example, the chairs went from a classic wooden chair to a ’70s or ’80s disco neon white plastic chair with translucent purple legs. Kinda
Pinkberry…which I guess would put it in the ’00s? Who knows.

AND, I didn’t have pink swirly whatever-food-that-is-supposed-to-be so I went with gold. (Cuz I’m so fancy.) Maybe mine was a truffle-infused mushroom-potato mash instead of an organic berry sorbet. Yeah, let’s go with that.

So here they are, side by side. I think it came out pretty well. And it also reminds me that it is important to dismantle sets once they are built (unless they are super epic, like the Ghostbusters set) so that you have an arsenal of pieces to build other things.

Not using instructions was also a great brain exercise — I felt like I was a little kid being part of some child development study. Or a grown-up using brain cells that haven’t had much synaptic action in a
while.

However you choose to celebrate Feb. 14 — and this year, you could count it as part of Presidents’ Day weekend if you’re in the U.S. — just remember: Keep building. And have fun!

I’m ready to make something else now. What’s next? Oh yeah, I have lots to say about Mixels too… coming soon!