How many times have you seen it so far? I’m talking about Star Wars:The Force Awakens, of course. As of this writing, I have watched the movie four times. Which is unusual for me. Usually, in-theater movies
are a one shot deal. Then, I wait for DVD. Well this IS Star Wars, after all, so it is an exception. And thankfully, it is NOTHING like the prequels. (Blech.)

Been waiting for enough people to watch it to create this set-up, thinking it might be a little spoilery. But as soon as I got my hands on the First Order Battle Pack (75132), I had to do it. So as to respect my feelings on spoilers, I’m not going to explain much about this, except for that the scene I tried to depict here was especially memorable to me for many reasons.

I was worried about how to get the marks on (and off) FN-2187’s helmet without damaging it, I decided to use red cake decorating icing. It worked out really well on a Funko Pop Vinyl for a The Walking Dead birthday cake, so why not? And THAT icing was on poor Glenn for about 8 hours, and it wiped right off with no staining. (Phew. Those vinyls are kind of porous!) It was also the perfect texture for this.

The question is: How did the LEGO Stormtrooper leave that print when his/her hand is a LEGO hand? Hmmm…Here’s a few more pics I grabbed before shining that Stormtrooper helmet back to its non-cake-icing self. 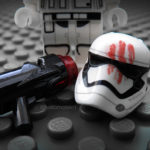 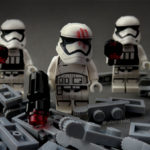 (Full disclosure — I had to redo this all over again. I may have seen the movie four times, but I swore that the other Stormtrooper smeared to the left. WRONG! So after putting everything away, I brought it all back out a day after and redid everything. OCD perfectionist tendencies, I guess you could say.)